A Bit of Brainy Humor 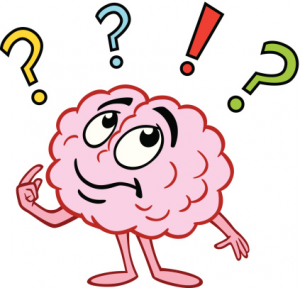 A Bit of Brainy Humor

Here are some brain and neuroscience-related jokes and riddles, with explanations of the terms and the word play involved.  Enjoy!

What happens when your brain sees a friend across the street?
It gives a brain wave.

Brain waves refer to repetitive patterns of activation of groups of neurons (more like ocean waves with lots of droplets of water together forming a wave than a hand waving).

What continues to work even after it is fired?
A neuron.

A neuron “fires” (or “is fired”) when it sends an electrical impulse. Neurons do this over and over again, so they continue to work even after they are fired.

Why did the brain refuse to take a bath?
It didn’t want to be brainwashed.

Brainwashing refers to the idea that someone can be forced to change their beliefs by various psychological techniques. Trying to brainwash someone does not necessarily require the use of a bathtub.

What do you call a human skull without a hundred billion neurons?
A no-brainer.

There are about a hundred billions neurons in the human brain (estimates have ranged from 80 billion to 150 billion). So if you have an empty skull (no neurons), there is no brain.  A no-brainer refers to an easy decision, hence the play on words.

What did the doctor say to the man who had an elephant sitting on his brain?
It looks like you have a lot on your mind.

Without addressing the philosopher’s question whether the mind and brain are the same, having an elephant sitting on it would be a lot.

Why do brain cells grown in a dish attend the ballet and the opera?
Because they are very cultured.

When cells of any kind are grown in outside of a live animal, the process is called being cultured. It really has nothing to do (other than a common word) with Arts that are considered cultured, like ballet and opera. And you can still wear cultured pearls when attending the ballet.

What do you call a Tyrannosaurus under stress?
A nervous Rex.

This is a play on the phrase “nervous wreck” with the “wreck”replaced with “Rex” (Tyrannosaurs Rex).

How much money do you have when you combine touch, vision, smell, hearing, and taste?
Five sense.

The words “cents” and “sense” are homonyms. But our senses are worth way more than a penny apiece.

What kind of brain images do dogs and cats like best?
PET scans.

PET refers to Positron Emission Tomography. It is a type of brain scan that involves the injection of a radioactive dye to create an image of structures in the brain. While dogs and cats are pets, the truth is that they probably wouldn’t enjoy a PET scan.

What did the hippocampus say during its retirement speech?
Thanks for the memories.

When someone retires from a career, they will often reflect on the many memories they have of their experiences. The hippocampus is a structure in the brain that is involved in memory creation.

What did the Hollywood film director say to the young neuron that wanted to be an actor?
Hey kid, you’ve got potential.

A neuron’s potential refers to the process of sending an impulse down its axon. Being a good actor will require a lot of those potentials!

What did the Hollywood film director say after he finished making a movie about myelin?
That’s a wrap.

Myelin is the coating (like a wrapping) around axons (the part of the neuron that conveys signals to other neurons). It makes signal transmission faster.

Why were the two retinas such good friends?
They always saw eye to eye.

The retina is the part of the eye that captures visual information from which it is sent to the visual processing part of the brain. Seeing eye to eye means agreeing. Interestingly, our two eyes are getting slightly different information from the outside word because of their different positions and our brain’s ability to combine that information is what helps create what we call binocular vision.

What is the brain’s favorite television channel?
The Neural Network.

Neurons connect and are activated in organized collections, called networks. It’s too bad there isn’t really a Neural Network; it might offer more mind-stimulating programming than most of what’s on TV.

What television channel is the favorite of neurons?
The Ion Channel.

Part of the way neurons send signals involves the passing of ions (electrically charged particles) across a membrane.  It turns out that Ion is also a real television channel.

Why was the neuron sent to the principal’s office?
It had trouble controlling its impulses.

Neurons communicate via electrical impulses. When the impulses of large groups of neurons in the brain of a student get out of control, then a visit to the principal’s office is, indeed, more likely.

When is a synapse like a tree?
When it is pruned.

Synapses are the connections among neurons, the junctions at which they communicate. When the brain eliminates a synapse, because it is no longer needed, it is called pruning, an apt analogy to the removal of a dead branch in tree trimming.

What is a mygdala?
I’m not sure, but for some reason, I feel strongly about it.

The amygdala is a brain structure in the limbic system responsible for emotion. There is no such thing as a “mygdala” but that doesn’t matter because it can still trigger an emotional response.

What did the patient say when the neurosurgeon said she needed to remove a mass from his brain?
Well, let me give you a piece of my mind!

This is another play on the idea of the mind and brain being the same. Giving someone a piece of your mind usually refers to telling another person off in anger. This patient might very well have been angry, but in this case, the removal of part of the brain would be physical.

What do neuroscientists call a scan of the brains of a family that can’t get along?
A dysfunctional MRI.

A functional MRI allows scientists to see which parts of the brain are more active than others when someone is performing an activity. There isn’t really such a thing as a dysfunctional MRI, but there are plenty of dysfunctional families.