A growing body of research shows that the human brain is affected by environment in many ways and has begun to characterize the relationship between poverty and cogntiive development. Jamie Hanson at the University of Wisconsin, Madison used MRIs to measure the amount of gray matter in the brains of children (Hanson, 2013).  What the researchers found was more gray matter by volume in the brains of children from higher SES, and less in those from lower SES.  Thus, higher SES is correlated with more neuronal connections and more efficient connections.  Similar results have been shown by other scientists, including Joan Luby at Washington University in St. Louis, whose research documented significant differences in MRI scans of the hippocampus, a brain structure involved in short-term memory storage and retrieval and in the consolidation of long-term memory.  In this study, differences were also noted in the frontal lobes, which play an important role in executive functions such as planning, impulse control and control of attention, and in the parietal lobes which play an important role in sensory integration, aspects of visual attention and may be especially important for connectivity among brain regions.

While the evidence has been building that poverty affects the brain’s physical structure and development, the evidence has also been accumulating that poverty affects how the brain actually performs the functions associated with these brain areas. One of the earliest studies illuminating the gap in capacity for low-SES children was Hart and Risely’s ground-breaking research on early family life and its effect on children’s IQ (Hart & Risely, 1995).  This research showed the profound effect or early childhood experiences on school readiness, including children’s cognitive skills.

While the language disparity is widely known, the differences between children of different SES are not simply a function of how many words they have heard by age 3 and the extent of their vocabulary.  More recently, research has shown a strong correlation between the degree of disadvantage and the magnitude of cognitive disparity. Moreover, these findings shed light on additional specific areas of cognition that are deficient which extend far beyond language acquisition (Noble, Norman & Farrah, 2005; Noble, McCandliss & Farrah, 2007).

Cognitive Skills and Their Relationship to Educational Performance

In our own research, we routinely see the impact of economics on cognitive development: 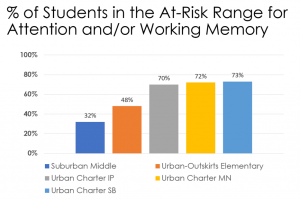 While larger proportions of students from low SES have challenges with executive functions, it is still the case that each student has a unique cognitive profile an understanding how to personalize instruction and supports is important.  Today, the assessment used in the studies that yielded the data on Executive Functions deficits, a nationally normed cognitive assessment called Mindprint, can be used in schools to identify students who need cognitive skill building in order to catch up academically, as well as to personalize learning strategies for groups of students with common cognitive gaps.

Deficits in cognitive capacity do not disappear immediately when children are exposed to good teaching and good curriculum. In fact, such deficits are important barriers to being able to learn and often constitute limitations to the amount and pace of learning. Before students with deficits can learn, they must develop the capacity to learn.

BrainWare SAFARI has been used with students from low-SES areas for many years, in schools around the U.S., to strengthen their cognitive skills as the foundation for learning.

In the Indianapolis Public School mentioned above, the students used BrainWare SAFARI 2-3 hours a week for 12 weeks. In that 12 weeks, their cognitive capacity increased by an average of 6 years, not only catching up on their intellectual age, but surpassing it for most students. 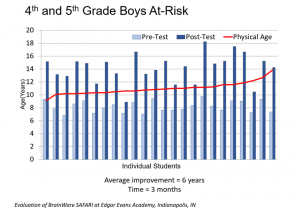 Both cognitive and academic gains were demonstrated at Glenwood Academy in Glenwood, IL, where students are from economically disadvantaged families. Improvements on cognitive testing ranged from an average 1.5 Grade Equivalents (GE) for 2nd grade students to 3.0 GE for 8th grade students, following 8 weeks of cognitive training.  The improvements in cognitive functioning resulted in academic gains ranging from an average of 0.5 Grade Equivalents in the 2nd grade to 2.9 GE in the 8th grade.

While the Indianapolis and Glenwood Academy studies looked largely at students at-risk and behind academically, a study in South Carolina looked at the impact of cognitive training across the spectrum of ability among school with low-SES students. In one elementary school, no students had qualified for a gifted program at the school. After 17 weeks, with 30-minute sessions 2-3 times per week, 5 students qualified based on CogAT scores in the 93rd percentile or higher, and 2 students qualified for the gifted program for CogAT scores in the 98th percentile. In all, 60 out of 64 students improved their results, with the average composite score increasing by 11 points and improvement across all subtests.

Data was gathered for a number of schools in the district in subsequent years providing an opportunity to look at the impact across the spectrum of abilities. 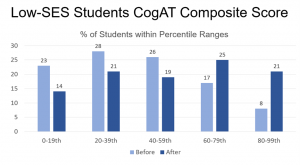 Improvement in cognitive skills cannot only improve academic performance, it can improve behavior, too. Many disruptive behaviors seen (not paying attention, acting out, etc.) can be a reaction to the frustration of how difficult learning is for students with less well-developed cognitive skills.

A mounting body of evidence suggests that the development of cognitive skills is what stands in the way of closing the gap for students who are economically disadvantaged.

Schedule a call to explore how BrainWare Learning can help close the gap for your students.